An excerpt from my latest book:

When I was a little girl, around four or five-years-old, I had a doll as tall as I was, with blonde hair and blue eyes, just like me. I absolutely adored her. We played together for hours on end and I would talk to her as if she were a real friend, even sharing clothes with her as we wore the same size (photo below). Many children had such dolls, large or small, that they bonded closely with in their youngest years. This is such a common and innocent thing all around the world—a child and their doll. However, some instances are a bit more unusual and, in rare cases, even scary.

At the age of four, Robert Eugene Otto (Gene) of Key West Florida was presented with such a doll. It was a very special gift, handcrafted with fabric and stuffed with wood shavings, having traveled all the way from Germany. Gene loved his new companion, naming him Robert, after himself, and even giving him one of his own outfits; the sailor suit that he still wears to this day. The two spent hours together as Gene took him everywhere, playing and bonding within the special magic of imagination.

At first, Gene’s parents only noted the small instances, such as Gene blaming the doll for things that he had gotten into trouble for; overturned furniture, broken toys— the usual childhood mischief. They didn’t think overmuch about these incidents, discounting it as mere child’s play, until things took a much darker turn. The parents claimed that on more than one occasion they awoke to Gene screaming in the night and that, after racing to the child’s room, they would find young Gene struggling to hold the doll pinned to the floor. This, of course, gave them cause to worry and so they tried to put some distance between the two, though it proved almost impossible to keep them apart.

Gene eventually grew up, maintaining his relationship with “Robert” for the entirety of his life, taking care of the doll until his own death in 1974. After his passing, Eugene Otto’s childhood home, known as “The Artist’s House”, was purchased by Myrtle Reuter. With the acquisition of the home Ms. Reuter also inherited an unexpected tenant–Robert the doll, who had been tucked away in the attic, though not as you might think. Rather than being packed away in storage, it would be more accurate to say that he was ‘housed’ in the attic, as the space had been set up with small furniture proportionate to the doll with a modest collection of toys for him to play with. Apparently, Otto’s wife had not been comfortable with the doll, so Otto had set up the room in the attic to keep both his wife and Robert happy. Reuter found the doll in the attic room and chose to keep him for a time, moving him downstairs, not yet realizing what she was in for. She claimed that Robert soon began moving around the house on his own, from room to room, and that she would sometimes hear a child giggling in the halls. She tolerated the incidents for a time, but after twenty years of endless and disturbing shenanigans, Reuter finally decided to donate Robert to a museum in 1994. “The Artist’s House”, which Eugene had grown up in and lived in as an adult with the notorious doll, is still standing at 534 Eaton Street in Key West Florida and is open to the public as a bed and breakfast where you can even sleep in Robert’s old room—if you dare.

Robert the doll is now over 100 years old. He remains at the Fort East Martello Museum in Key West Florida, where he is carefully preserved in a glass case. Visitors from all over the world travel to the museum every day to get a look at the haunted toy, and some people even write letters to him. Most often these letters contain pleading apologies from people who feel that they must have offended Robert in some way when they visited, having encountered great amounts of misfortune after their encounter with the doll. He has been blamed for many things, from car accidents and broken bones, to job loss and divorce. Apparently, he does not tolerate being disrespected.

Robert the doll has been featured on numerous tv show documentaries, telling the story of his relationship with the Otto’s, as well as the unusual occurrences that have happened since he came to the museum and within his previous home on Eaton Street. One such documentary tells the story of a young museum curator who was so afraid of the doll that she quit her job immediately after an experience with him. She explained that the doll had recently been checked, cleaned and put safely back into his display case the evening before. Then, the very next morning, when she arrived at work, she noticed that Robert’s feet were quite dirty and that there were small footprints all around the glass case. She then claimed to have heard a tap on the glass case and a giggle from inside. Already Terrified, the curator turned to look at the doll just in time to see him move. The terrified woman ran from the room and vowed never to return.

Not only has Robert the doll been featured in many documentaries, he has also inspired some very well-known movie characters. The most memorable cinema likeness is said to be that of the notorious Chucky doll. Though Robert the doll did not murder anyone, he did terrify his owners, forever taunting and toying with them and anyone else who came near. But maybe he really didn’t mean any harm with his mischievous ways, and if he could speak, perhaps he might simply ask—“Wanna Play?”

** This is a copyrighted excerpt from my latest publication, “Haunted Dolls ; the coloring book of nightmares” (photo below). Unlike most coloring books, my hand-illustrated pages are accompanied by interesting information about the featured subjects– in this case, the stories and fun facts about famous haunted dolls around the world. You can order your copy by clicking on the link above or by visiting Amazon.com. The book is $8.99 USD, or  £7.16 through Amazon.co.uk. 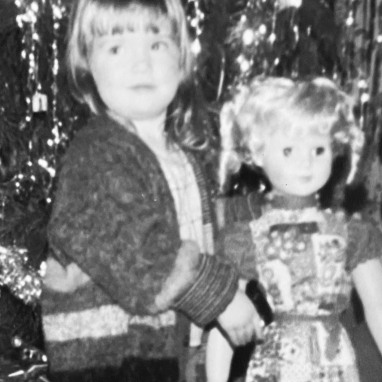 Author, Davina Rush, around age 5, with the doll mentioned in paragraph #1

This image is copyrighted but may be printed for personal use. This image may not be used for profit or resale or in any other publication or format.